We construct our identity and our own idea of reality from the images we encounter in everyday life; among them, the power of publicity, of the back-lit street billboards, much like that of TV, is irresistible. Even when we don‚t see them consciously, how many of these latent visual texts do we come across on our way to work? The legs, bodies and faces of the models become fixed in  our senses.
Being aware of this vigilant and profit-making mirror, we propose Bodies of Production as a critical gaze into the engendered social subjects represented daily  in public spaces within the  frame of the same territory, a re-signifying metamorphose from the standpoint of some plural discourses on the images which inform our collective imaginary.
Bodies of Production is a project of reflection on the generation of surplus value from our bodies in the public spaces institutionalised by Post-Fordist Capitalism, on the fetishising of desire and  on the normative models of sexual identity subverted from a position of awareness of the parodic masquerade and a position of re-signifying identity politics beyond the essentialist dichotomy of what is  “naturally” masculine or feminine. In the very instant of confluence of the commodity-objects and the gazes of the desiring machines we all are, the cycle of consumption and passivity which paralyses and veils the antagonisms and many diversities dormant under the apparent homogeneity of the stereotype of beauty, the family canon, the leisure standard, etc., is reified and fed-back.

Public spaces, loci of the construction of experience of a social collective which build its historical memory, and spaces of the displacement of our own embodied subjectivities, are being gradually privatised and suspend their co-ordinates; they become, within the narrative of globalisation, distopian territories which lack localisation and context, (often invisibly) barriered-off crossings interchangeable with the immaterial production of our bodies.
All of them, starting with airports, cash-points or highways, all the way to the squares and sidewalks of our own cities taken up by the café tables and the window displays and billboards, are marked by the sign of non-spaces, transit spaces where our identities (an often our most basic rights) are restricted and even suspended, extra-domestic, extra-national spaces, where the concept of a public space is impossible, where any heterogeneity or diversity is assimilated and deterred in its dissolution as a productive object/subject. Classantagonism, sexual difference, ethnic, cultural, religious or national diversity, otherness, dissent, heteroglosia, immaterial production dissolves them into the self-gratifying and omnivorous imperative of consumption of the diffuse dominion of networked companies, of the Franchise State and of liberal democracies, transforms memory into a present continuous, and paralyses the awareness of the way work colonises our lives.

We are subject-flows in non-spaces ˆ displacements of libidinal rather than physical distances - subjects in transit, we know, influenced by the pleasing hegemonic gaze. By assuming these conditions, and from the standpoint of dissenting and non-linear discourses, with this project we would like to rethink our media representations, to gender their false neutrality, to reaffirm our gaze and our inadequate desires, to get a glimpse on the class interests that inform them, their universalising cultural imperialism, to probe the possibility of visibility
of our bodies in the public sphere beyond the reification and the permanent hierarchic (im)position of otherness in relation to a reference model: to construct images which can generate (re)significations from diverse fragments, disperse micro-narratives, text of contextual (re)reading,representations which interrupt, or, at least, problematise (re)production, to evidence thepossibility of strategies of resistance and occupation of the collective territory beyond the traditional means of mobilisation of the working class and its idea of work as a catalysing/amalgamating factor. 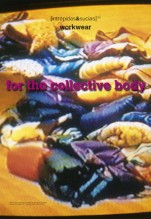 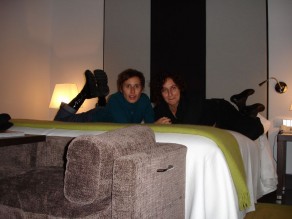 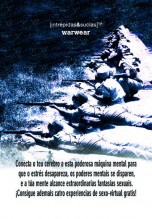